This week at Bethel in our service we will participate in a
Liturgy for “Day of Remembrance”
of Japanese American Internment
Sunday, February 19, 2017
(from UCC, Worship Ways) 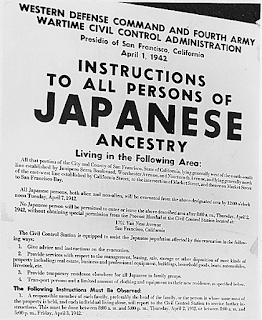 Background:
A “Day of Remembrance” is observed annually in February for the Japanese American community and for all Americans. This is a time to remember the pain and deprivations arising from the US Government’s wartime mass exile and imprisonment of Japanese Americans living on the West Coast of our nation, and related actions against persons of Japanese ancestry living in Hawaii and other regions of our nation. It is a time for all of us to reflect on the damage done to our nation when we treat people differently based on their race, ethnicity or religion. Most of all, it is a time for all Americans to learn from our errors and to renew our commitment to love and protect the equality and dignity of all persons.

February 19, 2017, is the 75th Anniversary of Executive Order 9066, signed by President Franklin Roosevelt, that resulted in the mass exile and imprisonment of over 120,000 Americans of Japanese ancestry, solely because of their race. In 1942, the US military exiled every man, woman and child of Japanese ancestry living on the West Coast, two-thirds of them American citizens, and put them in prison camps, without a single criminal charge against them and no trials to establish any wrongdoing on their part. This action is widely viewed as one of the darkest moments in our nation’s history, when we failed to uphold the constitutional rights we hold so dear for all of us.

These actions were taken against Japanese Americans based on our government’s claims of “military necessity,” saying their ethnicity made them disloyal to the United States, that our country was at risk of harm if they were not locked up, and that the loyal could not be distinguished from the disloyal. They were imprisoned behind barbed wire for over three years, and deprived of virtually every right guaranteed by the US Constitution, not because of any wrongdoing, but solely because of their race. Many lost all they had – their homes, farms, livelihoods and friends. Some lost their lives as well. The President, Congress and the courts all approved these constitutional deprivations based on claims of “military necessity.” No similar mass actions were taken against Americans of German or Italian descent.

A fair examination of the circumstances underlying these wartime actions never occurred until 1980, when Congress established a Commission on Wartime Internment and Relocation of Civilians to investigate these events. The Commission took testimony from over 750 witnesses and examined thousands of wartime documents, many declassified for the first time. The Commission’s 1983 report, entitled “Personal Justice Denied, concluded: “The promulgation of Executive Order 9066 was not justified by military necessity, and the decisions which followed from it - detention, ending detention and ending exclusion - were not driven by analysis of military conditions. The broad historical causes which shaped these decisions were race prejudice, war hysteria and a failure of political leadership.”

Congress subsequently approved an apology and symbolic monetary redress to Americans of Japanese ancestry, and a presidential apology was issued to all survivors. Yet the “precedent” of these wartime actions lies about like a loaded weapon, ready for the hand of any authority that can bring forward a plausible claim of urgent need. (Justice Jackson, dissenting in Korematsu v. United States).
In the past year, we have heard repeated references to the “precedent” of these wartime actions, to propose rounding up, registering, imprisoning or deporting Muslim Americans, Syrian refugees, Mexican Americans, and others. We pray that we never forget the lessons learned from our wartime treatment of Americans of Japanese ancestry.
Posted by Unknown at 7:45 AM No comments:

Promote Your Page Too

Promote Your Page Too